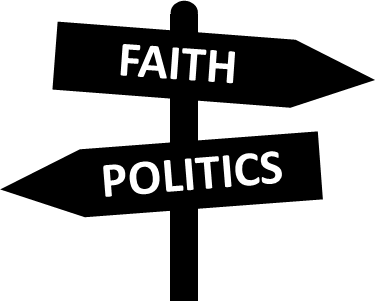 Q: I was recently confronted with the idea that Christians should not concern themselves with politics since our hope is in Christ and His eternal kingdom. I was wondering what the Bible has to say on our involvement in political affairs.

This question has been debated for years.

It's true we're told in the Word to focus our minds on "things above." We're also told that our "citizenship is in heaven." (Colossians 3:1-2, Philippians 3:20) I guess someone could use those passages to make the point that political involvement is unwarranted for believers. But the Apostle Paul also urged us to pray for the leaders of our government (1 Timothy 2:1-2 ESV). That command shows that God wants our presence in this world to make a difference.

"Wait a minute!" someone might say. "Praying for our nation's leaders is one thing. But voting and running for office is quite another! We're never told to participate that way!" And that's true. But remember...the kind of political involvement you and I are privileged to have here in America was virtually unknown in biblical times. Democracy as we know it was unheard of, and a political process that involved citizens casting a vote was incredibly rare in the ancient world. No wonder the Apostle Paul never spoke of it. Even when citizens were allowed to vote in ancient Roman elections, often the outcome was determined by the upper-class or by those in power who had already pre-selected their candidate of choice. The voice we have today in the USA along with our ability to change the political landscape is truly unique.

I believe it's possible to take advantage of our political freedom to cast our vote and still keep our minds focused on things above. It's true, we are citizens of heaven, but we are also citizens of the country in which we live. And as those who are commissioned to be "salt and light" in this world, I believe we have a responsibility to positively affect the way our country operates. In fact, throughout the centuries it was believers in Jesus who spearheaded change in areas like the slave trade both here and in Europe. They did it by affecting the political process and changing the laws of the land.

Participating in the political process does not mean we've sold out to the world or that we're trusting in man. Biblical Christians fully understand that the heart of mankind is corrupt and deceitful. Furthermore, we know that the condition of this world will go from bad to worse. (2 Timothy 3: 1-5) But until the Lord calls us home, we ought to be using whatever opportunities and freedoms the Lord has granted us to bring the light of His presence into this dark world.