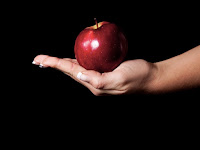 QUESTION: Why does Jesus teach us to pray "lead us not into temptation?" I thought the Bible promised us that when we are tempted God will provide a way out so that we can stand up under it? So isn't temptation inevitable? Can we really pray against it? Even Jesus himself was led by the Spirit into the wilderness to be tempted before his ministry, isn't that the same way we Christians are refined? This seems a little contradictory if Jesus encouraged us to pray against temptation.

A: It's not so much that we're praying AGAINST temptation as much as we're being taught to pray that we might get PAST temptation without giving in.

We are all tempted but temptation alone is not sin. So the petition here is asking to be saved from being sucked INTO the temptation. This petition basically expresses a healthy distrust of one's own ability to resist temptations or to stand up under trial. It acknowledges that our dependence is on the Lord to see us through.

David prayed a similar prayer when he said: Do not let my heart incline to any evil, to busy myself with wicked deeds in company with men who work iniquity, and let me not eat of their delicacies!  Psalm 141:4 (ESV)