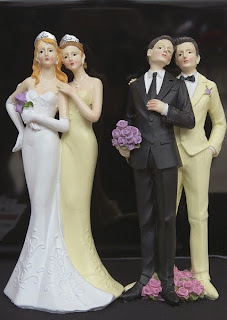 QUESTION: What is the biblical stance on situations like the Christian bakery refusing to provide a cake for a lesbian wedding? Is it biblical or appropriate?


If you're asking whether the Bible directs Christian business owners to refuse service to homosexuals, the answer has to be no. I've taught through the entire Bible multiple times and I can tell you there is no passage of Scripture that specifically directs that type of action. That means it becomes a matter of conscience.

The Bible makes it very clear that homosexuality is contrary to God's intention for marriage. That much is plain. But just because something is defined as sinful in the Bible that is not a reason for us as Christians to refuse to interact with those who practice that sin. In fact, the Apostle Paul actually says otherwise. Check out this passage:

I have written you in my letter not to associate with sexually immoral people—not at all meaning the people of this world who are immoral, or the greedy and swindlers, or idolaters. In that case you would have to leave this world. 1 Corinthians 5:9-10 (NIV)

Apparently some of the Christians in Corinth believed that they should withdraw from any association with anyone who practiced an openly unbiblical lifestyle. But Paul reminded them that that wasn't even possible! Besides, if we do that, who's going to be around to share the love of Christ?

I think what most people don't understand is why a bakery would refuse to accommodate a homosexual wedding. People often say, "Hey, they're in business to provide a service." But the truth is, some bakeries do not consider themselves to be merely providing a service. They would tell you they are actually taking part in the ceremony and celebration of the marriage—much like a pastor being asked to officiate, or a musician being asked to provide music. For many, it is so much more than a service. It is a piece of their lives. That's why they feel their conscience will not allow them to participate.

That being said, it remains a matter of conscience, And I believe decisions based on conscience should be respected, regardless on which side of this fence you find yourself.