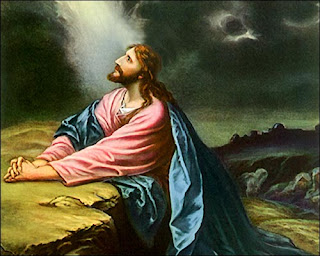 QUESTION: "If Jesus is equal to God then why does He pray to God?"

There's nothing surprising about struggling with the mystery and majesty of the incarnation, but the question itself assumes several things. Here's one of the biggest:

But here's what people forget:

1. As the Son of Man, Jesus willingly subordinated Himself to the Father. (See Phil. 2:5-8 and John 6:38). That means His position wasn't something that was thrust on Him. The Apostle Paul says Jesus "humbled himself" and took on the posture of a lowly servant. So, in His case, subordination does not imply inferiority. It was a willing subordination, not a mandatory one.

2. God became a man in the Person of Jesus Christ, and came to live His life on earth as a man. As such, He addressed His heavenly Father as any man would. The fact that He prayed to God the Father takes nothing from His own deity.

3. Jesus came to model the life of a believer, and prayer was just one of the things He modeled for us.

God the Father and God the Son are separate Persons. As such, they have been in communication from all eternity. The communion they shared during Jesus' earthly sojourn was just a continuation of that closeness and fellowship. It took the form of prayer simply because Jesus took the form of man.