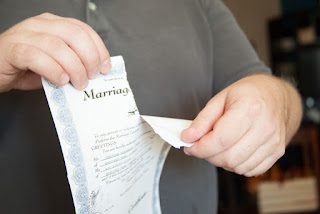 QUESTION: I know a couple who are legally divorced, but who continue to live together and remain faithful to one another in love and respect. The man has asked his "wife" to remarry, but she refuses for financial reasons. What is their marital position according to God's Word?

ANSWER: We need to remember that a marriage license does not mean that a couple is married in God's eyes, and the revocation of that license doesn't necessarily mean they are UNMARRIED either. Let me explain.

There have been many couples over the years who have signed a marriage license but never lived as if they were married. Such marriages of convenience are usually entered into to take advantage of legal or financial considerations. But in some cases the couple never live together or share anything that might be considered normal marital relations. Are they married in God's eyes? I hardly think so. A State-issued license does not a marriage make.

Marriage is a covenant of love and faithfulness that is promised and kept between a man and woman. A sharing of all that we are and all that we have—a joining of our lives so intimate that God refers to the two as "one flesh." (Genesis 2:24)

In the example you raised, a couple comes together in love and mutual commitment to share their lives with one another in marriage. However, somewhere along the way they decide to divorce and go through all the legal requirements for ending their marriage in the eyes of the State. However, they remain together physically and emotionally.

Biblically I believe this couple is still married in God's eyes. The only place their marriage has ended is in the realm of the State which means there are certain benefits they no longer have a legal right to enjoy.

As Creator of the marriage union, God has established His own guidelines for determining who is married and who is not. And His Word makes it clear that only death or unfaithfulness (adultery or desertion by an unbeliever) can end a marriage. (See Romans 7:2; Matthew 5:31-32; 1 Corinthians 7:10-15) That means God does NOT check the legal records at the courthouse to see if a couple is married or divorced.